Follow these 12 tips and you will 100% get this done and become a happy person! 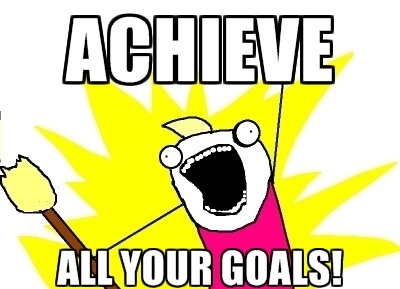 Have you ever heard the phrase: “He/she can move the mountains!”? Usually people who are described by these words have a well-developed will-power, inner strength and surely know how to achieve goals!

Those who waste their time working at low-paid jobs, or women, who suffer from living with a drinking husband, usually envy such persistent people and say: “What a lucky person! He’s got everything without making an effort!”

However, they don’t even guess that luck has nothing to do with it.

People, who have succeeded in their careers and become famous, worked very hard and made a lot of efforts to become who they are now.

How to get this done in the sphere of career?


My godmother’s name is Lida. She is my mother’s best friend, and that’s why she visits us very often (not only on my birthday!).

She had no luck with her first husband; he left her and their little son after 2 years of marriage, visiting them only on special occasions. Besides, the alimony that he paid wasn’t enough for a living.

When the Soviet Union split into independent countries, people experienced many difficulties. This happened not because of the past “prosperity” of communistic society, but due to the fear of uncertainty and changes.

However, while some people were constantly complaining about their lives and trying to return to the past, working for nothing at research institutes, others tried to accept the challenge of fate.

The whole generation of engineers, researchers, scholars and representatives of other professions decided to change their occupation and start their own business.

In the dull times of 1990s my godmother worked as a bookkeeper at one of the local plants.

When the authorities were about to close it down, she became one of the few employees who didn’t want to wait for the closure of the plant, but decided to quit herself.

She began searching for a new job right away, and soon she got a place at a private enterprise.

Lida encountered with some difficulties at the beginning.

She had to learn the aspects of new legislation that appeared with the formation of a new country, to establish good relations with tax administration (which hadn’t been one of her responsibilities before) and to learn how to work with the computer.

Obviously, my godmother hadn’t completely realized how to get this done and survive in this crazy world.

I saw how difficult her life had become. Sometimes she complained to my mom about her exhausting job.

Also, she didn’t have the opportunity to spend much time with her 8-year-old son Sergei and to check his homework.

In addition to that, her boss was a horrible impolite man, the classical representative of the 90s, who liked to quarrel with his employees when he was in a bad mood.

What is the purpose of life?

12 tips how to achieve goals

Set goal. Make plan. Get to work. Stick to it. Reach goal.

I think you’ve read enough to visualize the situation. I’m happy to say that my godmother had overcome all difficulties at work. Later she found a better job, and her new boss turned out to be an intelligent man, with an academic degree in economics.

The enterprise was working successfully, and my godmother became a wealthy woman.

She stopped counting coins, thinking how to save up for food. Besides, her boss had driven the loneliness out of her having become her second husband.

I asked my godmother to formulate a few recommendations that had helped her to get this done.

This is what she has said:

It’s not very difficult to understand how to achieve goals.

People just got used to blame somebody else for their own mistakes. Not everybody can take responsibility for his life and actions, but you should learn to do that!