4 recommendations that will help you to overcome fear of death and create a successful future despite all troubles! 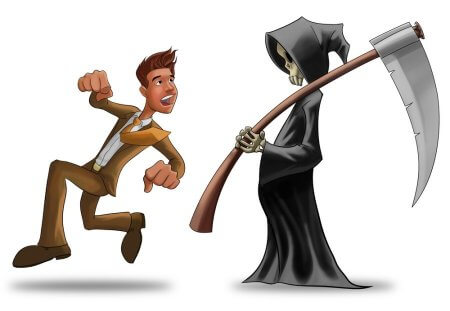 Before we start dwelling on such philosophic matter, I’d like to recommend you to subscribe to my daily articles emailing if you don’t want to miss anything useful! And I’m not afraid of saying these lofty words, because my every article is based on real life situations that have happened to me or my acquaintances.

Besides, I always try to sum up every story with useful recommendations (based on my own opinion) and substantiate it with my own conclusion.

Obviously, you will have an opportunity to express your own thoughts and even argue with me if you disagree with something (by the way, I love healthy criticism! J).

Once my close friend told me how much she was impressed and horrified by her grandmother’s funeral.

According to her, it became one of her worst childhood memories.

My friend’s grandmother died very suddenly, and her 12-year-old grandchild, who had never experienced a loss of a close person, encountered with a fear of death.

Moreover, its panic attacks still haunt her. My friend blames her parents for making the unprepared child meet the expression of death, and she dreams of overcoming her fear.

How to overcome fear of death, or 4 reasons why we are so scared of death


To take or not to take, that is the question…

Psychologists haven’t yet come to a mutual opinion whether parents should take their children to the funeral, even if their noble aim is to say final goodbye to a close person.

As for me, for a long time I had been thinking that a child should not be exposed to such stress.

I changed my mind when I heard a story told by my other friend, Olga.

Olga’s grandmother lives in a tiny village where all people know each other, and she happened to spend all holidays there.

As you can guess, the average age of the inhabitants was not young, and it was natural if someone died.

Nobody concealed a fact that someone, e.g. a neighbor, died, and children were not just taken to the funeral, but even allowed to participate in some rites.

All Olga’s friends knew that every old woman has a chest with many towels, kerchiefs and other useful things that were kept especially for the funeral. In such way those women wanted to prevent their children and close relatives from purchasing stuff in haste.

As Olga says, such experience didn’t lead to the appearance of some phobias. On the contrary, it helped her to develop a philosophic attitude towards death and perceive it as something inevitable.

This story made me think what actually makes us so scared of the Grim Reaper, and I came up with sudden conclusions.

This article will help you to understand what you are actually afraid of and how to overcome fear of death.

In my opinion, most people are not afraid of the death itself, they are more horrified by the phenomena that are related to it.

I determined the most widespread ones.

“Fear can hold you prisoner, hope can set you free”.
The Shawshank Redemption.

There is no answer to the question how to overcome fear of death, because everybody has his/her own reasons of phobia.

Try to determine what scares you the most and find a salvation to your problem.

As for me, I’m convinced that wasting your precious life on unreasonable fears is a crime!