Do you want to become a strong and firm person, but you are not aware how to build character? Then this article is going to teach you 8 ways how do it. 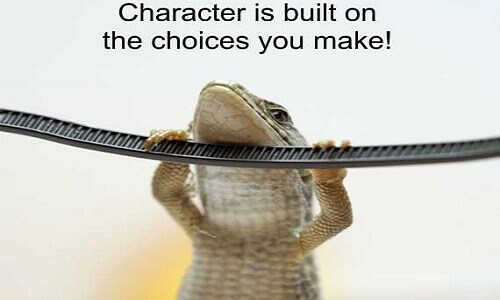 It’s not a secret that the quality of person’s life, his success and even happiness in life depend a lot on the character. Most people have practically the same “initial” possibilities (in the career, education and business), but very often the results turn out to be so different and sometimes even opposite.

People often want to change their character, because it bothers a lot in communication with other people and ruins the relationships.

It will never be too late to change character: a change may be done in any age. In order to build a strong character you must work hard, because this is a volitional quality, and not everybody can develop it, even if he knows how to do it.

So, let’s try to figure out how to build character and finally start feeling strong-willed and firm.

How can a strong character be explained?


Character in its narrow meaning (and in everyday usage) unites the natural peculiarities of how a person behaves, making it situationally easy or difficult for others.

In case somebody warns you: This man has a character!, you must be ready to face some difficulties in communication with him. Character often includes sharp angles of a person.

Strong character is a person’s ability to show how powerful he is: he stands his ground, has his own point of view, interests and stands up for them.

In a wider meaning the word “character” is used as a synonym of the term “psychological type”. In this case character is the sum of stable ways of behavior and natural reactions in a certain situation.

How to become a better person?

In accordance to the traits of character, people say there are people who have calm and nervous, reasonable and impulsive, brave and doubting characters (psychological types). There are people-sprinters, stayers and plenty of other variants.

Character can be defined also as a unity of behavior traits and peculiarities, which allow foreseeing how the person will behave.

Where does character come from?


Character develops (or is built consciously) in the process of personal life from four sources: genetics, upbringing, influence of the surroundings and the personal choice.

Speaking about genetics and the rest, which is called inborn, character can actually have genetic background and be inherited.

Though, it’s important to remember: genes define only disposition of a person towards things, but doesn’t predetermine how he’ll behave.

Character is not only inborn, but acquired as well.

The most important factor in the process of character building is upbringing, and a man starts to acquire different traits of character, while he is still a child, though unconsciously at first.

Children build character and choose the ways how to influence their parents. Parents build children’s characters, supporting definite ways of behavior. As a rule, they do in subconsciously.

An older person builds or renews some traits of character either consciously or not. It is right to believe that character is, in the first place, our habits. Then, an adult can and must be responsible for his character.

There is a nice saying: “After 30 everyone is responsible for his face”. It’s true and even more responsible he is for his character.

There is a myth no one can change the character.

Character is not a strict system; it defines only tendencies to certain actions.

One can build the character, change and correct it. It can be controlled and sometimes even simply chosen according to this or that situation.

How to build character: few steps, which must be done

Work on self-improvement is not an easy target. It is sure to bring fruits if you want to change something in your life, achieve more, become a person, who doesn’t grumble about destiny and never complains about trifles.

Everybody has some difficulties. Only some people face them with dignity and know how to build character and others just look for the guilty parties.