He is a real genius of animation. His name is Walt Disney. Read about his way to success in this article. 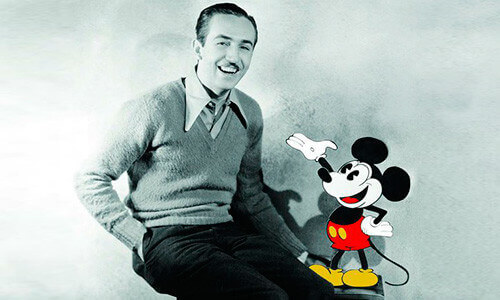 Today I’m going to return you into your childhood, or at least share a part of mine with you, by reminding you of the cartoons which the children of all ages were brought up on.

Do you remember Ariel, a beautiful mermaid with bright red hair, who was friends with a grouchy crab and a funny yellow and blue colored fish?

And what about a clumsy but cheery Goofy, who always got into troubles, but never lost his high spirits?

Or Darkwing Duck, who always rushes to help everybody?

Do you remember Chip and Dale, who tried to rescue the world together with their faithful friends – graceful Gadget Hackwrench, fat Monterey Jack and silent Zipper?

Or greedy Scrooge McDuck, who, fortunately, loved not only gold, but his nephews as well?

Oh, we can enumerate these cartoons forever; the point is that all of them are genius!

We have to thank for all these animation masterpieces to one person, Walt Disney. Today we are going to talk about his way to success.


The history of animated cartoons had started on the 5th of December of the first year of the XX century, when a little boy called Walt was born in one of the Chicago families.

During World War I Walt Disney was sent to France with the mission of Red Cross, he worked as a driver there.

Walt discovered his talent of drawing quite early, and that’s why he started working at one of the American advertising companies as an artist, creating commercials.

While he was working there, Disney understood that animation was destined for a bright future, and thus he and his business partner created their own company which produced cartoons.

“It’s kind of fun to do the impossible”.
Walt Disney

After he had failed to run his first company, Walt Disney didn’t give up on his dreams.

In 1923 Walt moved to Hollywood, where he created his own animation studios together with his brother, and named it after himself.

The first cartoon released by his company was a series about Alice from the book by Lewis Carroll.

The audience accepted the first product of Walt Disney Company with approval, and in 1927 the second character appeared – Oswald the Lucky Rabbit, which was also loved by children and their parents.

And there it started: Walt was drawing more and more new characters, such as Mickey Mouse (whose original name was Mortimer), Snow White and the Seven Dwarfs, Goofy, Pluto, Donald Duck and many others.

The popularity of his cartoons grew very fast.

His only failure happened in 1940, when his cartoon “Fantasia” was released. Critics disliked it, stating that works of Bach, Stravinsky, Beethoven, Tchaikovsky and other genius composers don’t match with centaurs and dancing mushrooms.

The cartoon gained popularity only in the 1960s.

Interesting facts: Peter Daniels: a millionaire from the slums

Walt Disney also produced several cartoons about nature, such as “The Living Desert” and the “The Vanishing Prairie”. He also didn’t forget about children fond of adventures. Especially for them he drew “Treasure Island”, “Robin Hood” and “Mary Poppins”.


Walt Disney also made a large contribution into the popularization of animal world.

His relatives mentioned that little Walt accidentally killed an owl, and it struck him very hard. Probably, he wanted to make up to the animal world, and thus created so many animal characters, which became so popular and loved by all children. Here belong: dogs Goofy and Pluto, mice Mickey and Minnie, deer Bambi, elephant Dumbo and many others.

He dedicated so much time and love for creating these characters that it could be felt by young audience even through the screen. People, who grew up watching Disney’s cartoons, just couldn’t treat the animal world badly.

One of my favorite Disney’s characters is Snow White. As it turns out, the story of her creation is very interesting.

When Walt worked as a delivery man, he happened to watch a silent movie about Snow White and the Seven Dwarfs, and he swore to depict them in much more interesting and vivid way.

The success of “Pinocchio”, which was released in 1940, was not accidental either. The cartoonist made a lot of efforts in order to depict the personalities and habits of his characters most precisely. In order to draw the scene where Pinocchio escapes from the whale, Disney even observed the behavior of real whales.

The other popular and loved story was about a poor girl, who was constantly being oppressed by her evil stepmother, but in the end managed to find her prince.

“Cinderella” first appeared on the screens in 1950 and received “The Golden Bear” on the film festival in Berlin.

The image of Disney’s Cinderella is still being reproduced on the clothes, towels, backpacks and bedclothes for girls.

How to become beautiful?

What else occupied Walt Disney apart from his work?


Walt Disney was head over heels in love with his profession.

He even married a girl who was related to his work.

Lillian Bounds worked as a secretary at Walt Disney Company.

After eight years of marriage, Lillian gave birth to their daughter, Diane Marie.

The spouses dreamt about having a second child, but Walt’s wife had several miscarriages which ruined that dream.

Being a person with a strong character and positive attitude, Walt Disney didn’t give up and found the way for realization of his dream, and thus the couple adopted the girl named Sharon.

Despite his busy schedule, Walt tried to devote maximum time to his family.

Once, taking a walk with his daughters, Walt thought about creating a place where children would be relaxing and having a lot of fun.

Disney’s daughter Diane, a mother of seven children, spent all her life popularizing the name of her famous father. She even published his biography and often held events meant to honor her dad.

Walt Disney’s brainchild after his death

Walt Disney passed away at the age of 65.

Due to the fact that Disney died because of lung cancer, his company producers decided that Walt Disney Company will never depict smoking people and cigarettes in their films.

Despite the fact, that the founder and the inspirer of the company passed away, his studio continued to work and produce more and more interesting animated films both for children and adults.

In order to honor the contribution of Disney into the world culture, the US Congress decided to reward him posthumously with a gold medal.

Walt Disney was a unique person.

This man, who gave children so many wonderful characters, was reproached for anticommunism and anti-Semitism. However, all these reproaches cannot argue with the fact that Walt Disney indeed was the genius of animation, who turned every viewer of his cartoon into his faithful fan.