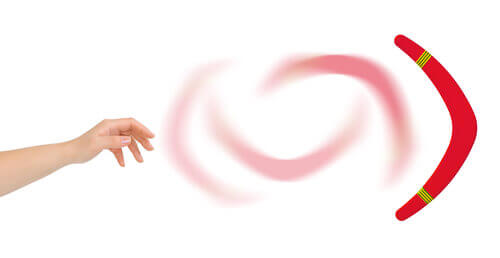 Welcome, my dear readers, to our useful website – Motivational tips! 😉

I guess that right now you are asking yourself a question what a threatening weapon of aboriginals has to do with psychology.

Actually, it really has something to do with it!

This happens due to the fact that the specialists in propagandistic and pedagogic psychology interpret it a bit different than other people.

How specialists explain “boomerang effect”, does it really exist and what you should do in order to receive only good stuff in return – this is what this article is about!


Specialized literature defines this word phrase as an effect which is made on a person or group of people by some information.

Usually this effect is completely opposite to the preliminary expectations.

This happens very often due to the fact that the information which is spread is:

We can witness such situation during the elections.

For example, one candidate is being poured with such a huge amount of blackmail that the electorate starts to console him instead of feeling hatred towards him.

Boomerang effect is often used by the PR-managers of celebrities, who want to attract attention to their clients and regain love from the audience.

We can use the example of the last Russian scandal with private photos and videos of Natasha Korolyeva.

Milonov, who is a notorious deputy of the State Duma, offered to deprive celebrity of her title.

What is déjà vu?

However, the audience started protecting the celebrity instead of feeling disgust and protest.

If we consider that many people think that the singer has published those photos and videos herself, we may conclude that Korolyeva has received the desired.

Boomerang effect: How is it understood by ordinary people?

All our deeds will eventually return to us!
This is the main principle of boomerang effect.

The fact that our ancestors had been familiar with this phenomenon long before it was discovered by psychologists can be proved by such proverbs, as: “As you sow, you shall mow”, “As the call, so the echo”, etc.

At that time people paid much attention not only to the way of life, but also to their words and thoughts.

Boomerang effect was also supported by the priests, because back then church played a significant role in people’s lives.

Priests persuaded people to lead a religious way of life and avoid making sins in order to hope for the bright future, if not for the bright present.

The truth is that sometimes priests don’t follow their own recommendations, but this is a completely different story.

Nowadays bad situations may be explained by such words: “Oh, this family has bad luck because their grandmother was a witch who cursed the whole village, or stole somebody’s husband”, etc.

Obviously, most of the time we have to blame ourselves or outer circumstances for some problems, but we also have to remember about the presence of the boomerang effect!

How my ex-boss started believing in boomerang effect?


Having graduated from the university, I worked for some time at one organization.

My boss was a nice woman and an excellent specialist.

The problem was that she liked to freeload. Besides, she could easily deceive other people if she wanted to derive benefit from them.

Sometimes I thought that she had no idea about the existence of repair shops, construction gangs and other organizations.

If she needed help, she always asked some of her friends or acquaintances to do the job for her.

She led a quite normal life because she persuaded herself that there were no higher forces.

Also, she didn’t feel any remorse for her lifestyle, forget about the boomerang effect – she didn’t believe in this phenomenon, as she considered her actions to be completely adequate.

My boss thought that she didn’t do anything bad. Moreover, she was sure that everybody else lived the same way.

However, some higher forces thought that nothing was as harmless as it seemed to my boss.

How to materialize thoughts?

She raised a credit in the bank, hoping that somehow she would manage to pull through it; however, she overrated her abilities and underestimated her rival.

The result was deplorable: the bank took away her mortgage on the apartment which had been presented to her by her parents.

After that case I’ve never heard her saying: “I’ll do whatever I wish and get away with it!” Hopefully, she has changed her lifestyle as well.

What should you do in order not to fall victim to boomerang effect?


I’ve formed several useful recommendations that would help you to live a happy life and prevent you from experiencing a boomerang effect.

And don’t forget to subscribe to the informative articles emailing!

Nourish your brain only with useful information; don’t litter it with the trash from the Internet!

I’d like to recommend you to be always in good spirits and practise positive thinking! Every shared smile, nice word and courtesy markers, such as “thank you” and “you’re welcome” will surely return to you because of the boomerang effect.

Отменить ответ
Useful article? Do not miss the new!
Enter e-mail and receive new articles in mail
You have successfully subscribed!
You will receive a confirmation letter
in a few minutes :)
Please, follow the link in the letter to confirm the registration.
If the letter hasn’t come within 15 minutes, check
the junk mail folder, in case
sthe mail service considered it spam.
If there is no letter anywhere, contact the site admin.
You have successfully confirmed subscrib!