I think all of you know the name of Arnold Schwarzenegger. So let’s learn how he started his way to success and how he achieved it. 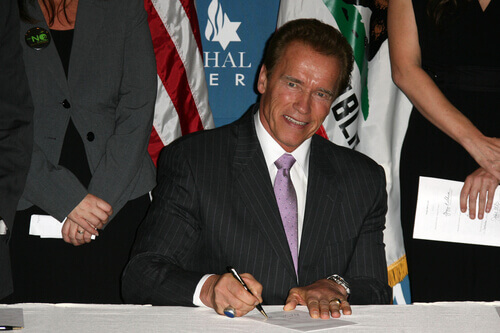 Dear readers of the site Motivational-tips.com!

The generation of the 90s is likely to remember the first action movies crushing through the iron shield to our screens.

They showed how good guys mercilessly kicked bad guys and always won no matter what happened.

Best of all I remember young (as for that time) Arnold Schwarzenegger who, playing the roles of a dashing soldier, an invincible commando, an iron-head Terminator, or some other unforgettable character laid down bad guys in piles.

So, my article today is about iron Arnie.

But their meeting could have never happened because Arnold Schwarzenegger’s father, who was in the military police during World War II, fell under investigation.

Fortunately, no evidence of his crime was found that’s why he was not simply released, but also allowed to continue his work as a policeman.

Arnie, a second child in the family, was born in a small Austrian village on the 30th of July in 1947.

Strict Catholic education and severe discipline imposed by his father couldn’t kill Arnie’s dream of being rich and famous.

At the age of 14 he quit playing football practiced at his father’s insistence and found serious interest in bodybuilding.

He didn’t simply work out for showing off before the girls – he spent days in the gym, sneaking there through the hole in the fence even on weekends to get access to his beloved iron.

Then he joined army, but this page of his life didn’t leave him any pleasant memories.

Quite the opposite: he was put into military prison for his absence without leave when participating (and winning) in “Mister Europe”.

After army, he resided in Munich and worked there as a trainer in a gym.

In 1966, unexpectedly even for himself, he became the Vice-President of the “Mister World” competition and realized that he felt limited in his country.

Arnold Schwarzenegger and his first steps to fame

“You can say you have bad genetics or slows metabolism, but you can also get your ass off the coach and begin working on yourself, set the goal and believe in yourself. In this case you will certainly achieve success”.
Arnold Schwarzenegger.

Absence of visa, money, and contacts significantly complicated his first years in the States.

Fortunately, soon he got luck on his side and the most famous coach in bodybuilding, White Wader, decided to patronize him.

Long trainings brought their result: at the age of 23 Schwarzenegger won the most prestigious contest “Mister Olympia”. This victory was followed by six more until 1980 when he ended his sports career.

Since 1969 Arnold Schwarzenegger began beating his path to cinematography.

Huge muscle mass, strong German accent, lack of any experience… “This guy has no future”, film directors stated. Truly, his first attempts were a flop – only John McTirnan shooting “The predator”, believed in him. But the true popularity along with huge money found him after “Conan the Barbarian”, “Terminator”, “The running man” and others.

Arnold Schwarzenegger: from movies to politics


Arnie, who made his first million at the age of 30, decided to strengthen his capitals with the help of various business projects.

Post mailing, real estate, sports, comic strips – all of these businesses brought Schwarzenegger his millions that gradually accumulated in a billion.

After this you might ask yourself a question, “What else does this man need? He made his sports career, he became a celebrity despite an overall skepticism, he has a constant flow of money. Just live and enjoy!”

But iron Arnie decided that the political Olympus was also in his plans. Supported by republicans, he made it to the post of California governor.

How to achieve success?

And may he be remembered as one of the worst governors in history, he achieved his goal: he got the experience of being a politician.

He changed his partners as gloves, treating none of them seriously and even not concealing his true intentions. He used fair sex only for one thing – “supporting one more of his body functions – carnal love”.

It lasted so until in 1977 he met young promising journalist Maria Schweiner. Beautiful and well-educated, originating from an honourable family (Maria is John Kennedy’s niece), and a convinced democrat (considering that Schwarzenegger always supported republicans) she was very much unlike all his previous women and he fell in love.

Everybody realized that Arnold settled down: strong marriage, no scandals, 4 children, and his wife’s support for him at the elections. But Arnie surprised everybody once more having an affair with one of the maids and even making her a baby.

After 25 years of a seemingly perfect marriage they broke up.

May foes consider Arnold Schwarzenegger a stupid talentless actor, may politicians call him a useless immigrant who took somebody else’s niche, iron Arnie doesn’t care a straw and gets what he wants no matter what.

Popular quotations from the legend of movies and bodybuilding are as follows:

So this was the story of Arnold Schwarzenegger – a winner in any endeavour he decided to undertake.