What is Pareto law, where and how is it applied and what can be achieved with its help? Find the answers in the article! 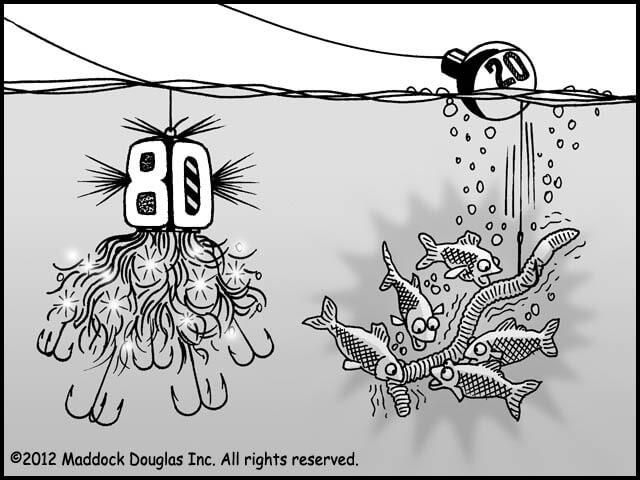 Have you ever noticed that sometimes you don’t have to make a lot of efforts in order to realize one of your dreams and manage to achieve your goal quickly and easily? However, have you encountered with a situation when you struggle very hard in order to come at least a bit closer to the fulfillment of your dreams?

Actually, this regularity was revealed back in the XIX century by a very smart guy, Italian sociologist and economist. Later this phenomenon received the name of its founder – Pareto law.

Today we are going to talk about this law.

What is the origin of Pareto law?


A famous economist and sociologist Vilfredo Pareto lived in Italy in the end of the XIX century.

When he was gathering material for one of his works in economics, he tried to find out how material goods are spread between different strata of society. First of all Pareto wanted to analyze the situation in his native country.

You can imagine how surprised Pareto was to reveal that 80% of the country’s material goods are owned by only 20% of population. His further researches proved that the same situation takes place in other countries as well.

Vilfredo wrote a scientific work on that topic and received huge applause and approval both of his colleagues and students. That could be over right there: who else would have cared about early economic studies except for the economists themselves? Fortunately, Pareto’s studies were not forgotten.

In the middle of the XX century a famous researcher Joseph Juran encountered with Pareto’s book and noticed these numbers: 80/20. Juran considered this correlation to be nonrandom. That’s how he deduced Pareto law in 1951, almost half century later after Pareto’s death.

As you can see, this law appeared much later after the deduction of the formula of 80/20, but it has been successfully used in many spheres of life ever since.

What is Pareto law?

“Men follow their sentiments and their self-interest, but it pleases them to imagine that they follow reason. And so they look for, and always find, some theory which, a posteriori, makes their actions appear to be logical. If that theory could be demolished scientifically, the only result would be that another theory would be substituted for the first one, and for the same purpose”.
Vilfredo Pareto

As you have already understood from the information about the origin of this phenomenon, Pareto law is an empirical rule which consists in the correlation of 80% to 20%.

There is no exact definition of this term, as it has various implementations in different spheres of life.

However, if we take its common essence, we can give the following explanation to this law: 20% of our efforts give 80% of the desired result, while 80% of our efforts result in only 20% of the planned outcome.

Thus, you shouldn’t keep standing at the closed door; you have to choose other significant goals, which can be realized with fewer efforts. If we try to make a conclusion, we can say that Pareto law is the proportional correlation between actions (causes) and results (consequences).

Obviously, you cannot state that the correlation of 20 to 80 is universal and can be applied everywhere. Actually, the proportions can vary. However, because of the fact that nobody is going to make a detailed analysis of every situation, Pareto’s proportional correlation is considered to be the most optimal.

The main principles of Pareto law:

Where can we use Pareto law?

Actually, Pareto law can be applied practically everywhere, for example:

Mainly this wonderful law is used by economists, managers and political scientists. However, as you can see, its implementation is different in every sphere, especially in psychology.

For example, psychologists use Pareto law in such issues as time-management, self-development, self-education, relationships with other people, etc.

I hope that you’ve understood the main principle of this law: what you should do first of all, is to find these 20% of activities, books, people, decisions, etc. that will give you 80% of result!

What can you achieve with the help of Pareto law?

Vilfredo Pareto didn’t have a clue that his law would be applied not only in economics, but in other spheres of life as well. You can use this correlation of 80/20 in your everyday life, too.

For example, with the help of Pareto law you can do the following:

For example, spend one week on analyzing your usual activities and make a conclusion which of them are effective and which of them aren’t. After you finish doing that, you will be able to plan your perfect day.

This is the true essence of Pareto law: it’s very simple, but extremely effective!