Coco Chanel – the legend of fashion industry, whose achievements in the fashion world have never been surpassed! 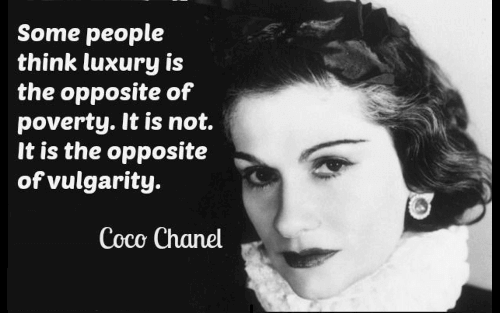 Welcome, my dear readers of Motivational-tips.com!

Today we are going to talk about a world-famous legend, and her name is Coco Chanel.

I think you cannot disagree with me that every sphere of life has its own famous representatives (though many of them achieved their fame without hard work or talent), but there are also idols, whose level of fame and popularity cannot be so easily achieved.

For example, there is a famous singer Iosif Kobzon who is well-known for his wig (which is practically nailed to his head), his face (which is the victim of hundreds of plastic surgeries) and his silly, pointless sayings.

On the contrary, another famous singer Fedor Shaliapin had become a living legend because of his talent.

All football fans know Artem Milevskyi, who seemed to be a very promising footballer when he played for the youth team of Ukraine, but who became famous only for his endless binges and racing on the expensive cars.

On the contrary, there is also Pele whose name is well-known even to people who don’t have a clue how a football looks like.

Fashion industry gave us a famous misogynist Andre Tan, who clothed female members of our national team in shapeless garments, but fortunately, it also gave us Coco Chanel, the legend of fashion industry, whose achievements and popularity in the fashion world had not been surpassed yet.

Later, when she changed her name to Coco and became famous, Gabriel would say that she was 10 years younger and was born in 1893.

The childhood of the future celebrity couldn’t be called happy: she lost her mother at twelve, and then her father left their family. Gabriel and her four little siblings were left alone. Gabriel was sent to one orphanage after another, and thus she became mature very soon.

At 18 she got her first position of the shop-assistant at the underwear store. Dreaming about a huge fame, Gabriel started performing at the cabaret.

She has not become successful as a cabaret singer, because she possessed neither singing nor dancing skills.

However, this part of her life gave Gabriel two presents: first of all, she acquired the name Coco (from some of the songs she sang) and the affair with a wealthy officer Étienne Balsan, who helped her to forget about poverty.

Unfortunately, Étienne didn’t support Gabriel’s dreams about fashion. Thus, the young lady found another man who shared her sacred desires, and his name was Arthur Capel. He helped Coco to open her first boutique of hats in 1910.

Moreover, she entered their circle as their equal. Nobody treated her as a milliner or service staff. She was considered to be a star and everybody wanted to meet her.

During next decades, up till the beginning of World War II, Chanel’s fame and income had been growing up very quickly.

Name of Coco Chanel is synonym to success in fashion industry


Everything had changed when the war began.

Coco had to close down her shop because Paris was occupied by the fascists.

Apart from this, Chanel’s nephew was held captive and she decided to have an affair with a German officer in order to free him.

When the war ended, Chanel was blamed for her connection with occupation regime.

In 1953 Coco Chanel ventured to open a new shop in Paris, but came to grief when she presented her first collection to the public.

Fortunately, Coco didn’t give up and ignored the narrow-minded critics. Instead, she concentrated on her work and managed to climb the fashion Olympus in only three years!

Coco Chanel presented her clients with one masterpiece after another. Fashionable women followed her recommendations thoroughly and copied the style of Mademoiselle Chanel, while her colleagues envied her and lived in the shadow of Coco.

The favorite of muses died in 1971 from heart attack at the age of 87. She was buried at the cemetery of Lausanne in Switzerland.

Witty tips to the future generation from Coco Chanel


As a matter of fact, Coco Chanel created so many aphorisms that they could be published as a separate book of quotes. However, I think that top-10 of them can be listed here, and they are:

Coco Chanel was not only the legend of the fashion world, who gave women a huge variety of basic pieces of clothes which will never become old-fashioned, she was also a successful business lady and an unbelievably wise woman.

A real legend, you know!